Nadia Mukami introduced her new bae Arrow Bwoy with a steamy photo of them kissing at the Coast. The singer went ahead to disclose on Instagram Live that they have been together for quite a long time; even though they kept it a secret. Arrow Bwoy and Faim-courtesy IG-Edgar Obare However, Arrow Bwoy has been exposed for allegedly being married to another woman, by the name Fahima Faim. As seen on Edgar Obare’s Instagram, Arrow Bwoy is said to be ignoring her. It’s alleged that they have been married for over 10 years.

After Arrow Bwoy and Nadia Mukami sharing a photo of themselves kissing on the beach, they captioned with sweet words; confirming that they are an item. Nadia described Arrow Bwoy as her handsome man. “My hardworking, patient, pure-hearted, handsome man” To which the Arrow Bwoy responded, “Toto si toto you are my smart, intelligent, boss lady mama Safari. My beautiful thing.” On the other hand, Nadia Mukami had previously insinuated that she was dating an Indian guy by the name Priyan. It’s now alleged that she dumped him for Arrow Bwoy. I bet she’ll be regretting her decision if the allegations are true. 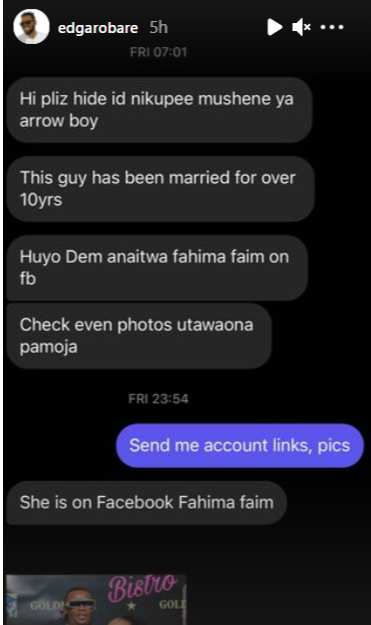 Trouble In Paradise? Eyebrows Raised As Nadia Deletes Photos With Arrow Boy And Unfollow Each Other

Kumbe Akona Bibi! Arrow Bwoy Exposed For Allegedly Being Married For Over 10 Years