Socialite and entrepreneur Amber Ray has been the talk of town in the last couple of days. In an interview done days ago, her hubby Jamal disclosed a couple of things that most never knew about Amber. Most people never expected him to talk about Amber Ray being the most God-fearing person he knew. Amber Ray’s conspicuous and savage answers to her fans makes us to think otherwise. We also learnt that Amber is a 2nd wife to Jamal, even though there has been rumors that there’s still another woman in between. 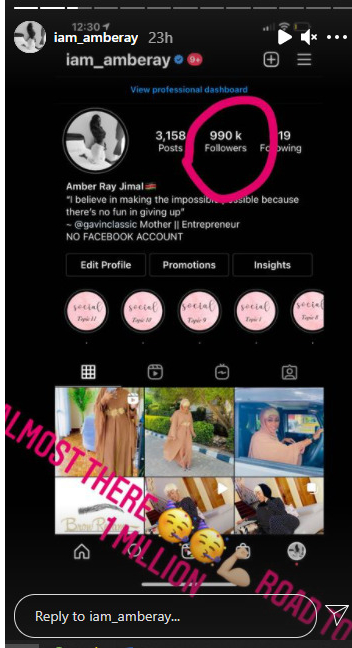 If the latter is true, Amber will now be the 3rd wife. Anyway, the fact that Jamal officially made Amber his 2nd wife still stands. The mother of one has now been nick named ‘The President of 2nd Wives’ and she’s proud of it. The number of her Instagram followers has been on the rise. In less than a week, she gained over 10K followers. Amber celebrated the achievement with her online fans; ”Manze ata sijui mbona mnanifollow but whatever the reason, I just want to say thank you…. 1 million followers na mimi Si Msanii is not a joke. Thank you once again