Fallen Tanzanian president John Pombe Magufuli was a man who loved the creative industry and had a soft spot, especially for musicians in his country, both male and female. The late even used artists in his bid to rally support for his first and second presidential bids, which saw many of them join the Chama Cha Mapenduzi party. In this article, we look at some of the moments Magufuli was spotted hanging out with his favorite stars.

Diamond Platnumz and the late Magufuli always had a good relationship and he had the utmost respect for his president.

Magufuli was a big fan of Ali Kiba and Diamond. He thanked them for reconciling for the good of Bongo music.

Magufuli here with Wema Sepetu during his days as minister. The man just loved being around creative people.

Singer Zuchu could not believe the late president slightly knew her. Her reaction was just priceless.

Rayvanny showing his respects to Magufuli while receiving a hat to confirm his support during his re-election bid.

Nandy was also a firm supporter of the late. Magufuli knew which artistes he needed to back his reelection bid.

Singer Mbosso performing for the president at an event and getting his CCM hat.

Harmonize and Magufuli had more of a father-son relationship and the singer even composed a song for the president. Magufuli danced to the hit several times.

In other related news, They say the apple doesn’t fall far from the tree and truth is, the President John Magufuli two kids appear to have taken after both their parents. A few days ago we introduced Magufuli’s daughter Jesca who looks like her daddy, and thanks to Juma Lokole we now have the first son’s photo too. As revealed by the popular gossipmonger, Juma Lokole; he says that the family speech (during Magufuli’s burial) was read by the president’s son who is known as Joseph Magufuli. He represented both his mum, Janeth, and their sister Jesca – now that he is head of the family. 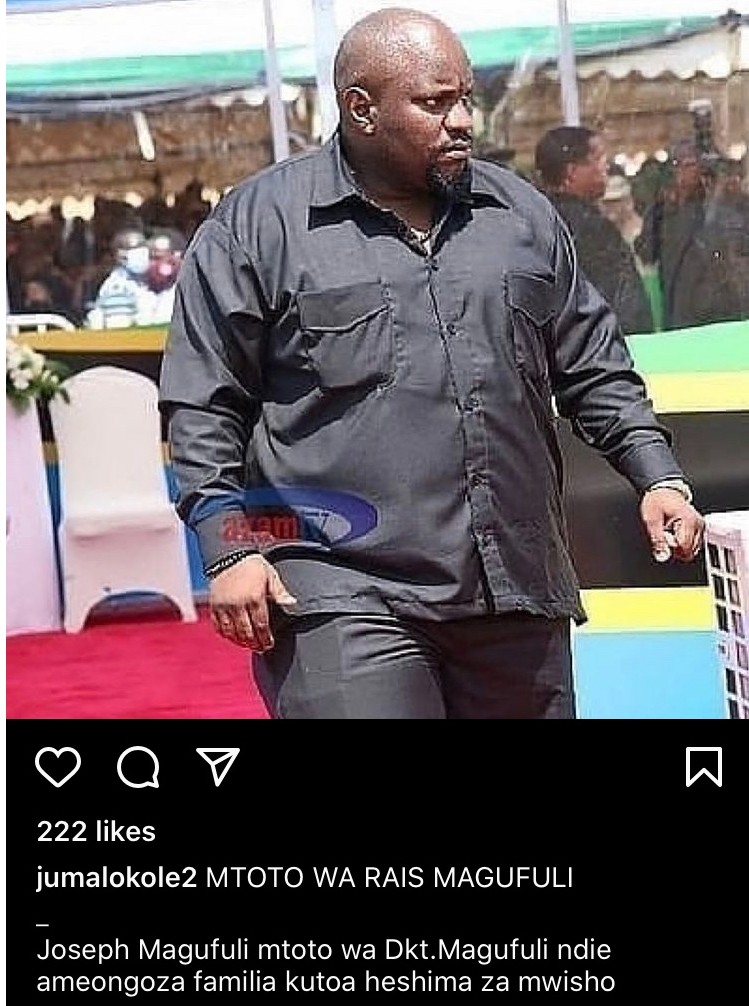 Although the picture shared by Lokole is not so clear; one can’t help but see the resemblance between the young man and his mother. To introduce him to the world, Lokole captioned the post; Joseph Magufuli mtoto wa Dkt.Magufuli ndie ameongoza familia kutoa heshima za mwisho. Having died while still in office, there was no other way but to move the late Magufuli’s lifeless body from one county to another; to give citizens an opportunity to bid their loved president goodbye. After a tiresome week, Magufuli was finally laid to rest on Thursday, 25 March as revealed. It is indeed a big blow to the Bongo nation – but all in all – this too shall pass.